Morning is here and as autumn arrives, more heating foods may be initiating a craving. Most Americans eat cereal for breakfast and although store bought raw cereals are delicious, they are also very expensive. I awoke this morning with the inspiration to create a new cereal with buckwheat, which has nothing to do with wheat and is actually a fruit in related to the rhubarb and sorrel food families. Part of this recipe is a superfood that is tasty and very unique which is called mesquite.
Buckwheat is an adaptogenic plant because it thrives in poor soil conditions, freezing temperatures, droughts, and excess rains. When a plant is an adaptogen such as buckwheat is also strengthens our own systems in being more adaptable. Buckwheat is resistant to damage and is therefore relatively inexpensive and easy to grow. Sprouting buckwheat is also highly nutritious with high levels of the amino acid trytophan, B Vitamins, Vitamin E and is an excellent source of protein. Buckwheat green sprouts are grown in soil.
Buckwheat is native to Northern Europe and Asia and eventually spread to Europe and Russia in the 14th and 15th centuries, and was introduced to the United States by the Dutch during the 17th century.
Whole buckwheat is a very nutritious food. The protein in buckwheat contains the eight essential amino acids and is also high in lysine. Buckwheat is also rich in phosphorus, magnesium, iron, zinc, copper and manganese. Buckwheat is also a good oil source of Alpha-Linolenic Acid, an essential fatty acid and is the reason that sourcing and eating raw buckwheat is very important. Cooked fats are toxic and when buckwheat is roasted the fat no longer maintains its integrity.
Health Benefits of Buckwheat:
•High in fiber
•Contains the eight essential amino acids
•Contains many minerals including: phosphorus, magnesium, iron, zinc, copper and manganese
•Contains a rich supply of flavonoids, particularly rutin
•Lowers glucose levels and is beneficial for managing diabetes
•Has been found to lower blood pressure and reduce cholesterol
•Is a gluten-free alternative to grains 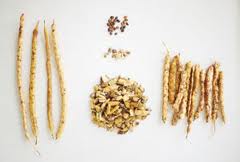 Mesquite meal has a sweet nutty flavor. This fragrant flour can be used in baking or as a seasoning on food & in drinks.
Mesquite is a food that has been used for centuries by native tribes throughout the southwest US and northern Mexico. The medicinal properties of mesquite have long been known. Mesquite is commonly used to treat eye conditions, open wounds and dermatological ailments. Acting much as an antacid, it can also treat digestive problems and has antibiotic activity. The bark is also helpful in stopping excessive menstrual bleeding & reducing fevers. Its aqueous extracts are antibacterial. Mesquite has soothing, astringent, and antiseptic properties. It is used as a restorative after bouts of dysentery, diarrhea, stomach/intestinal distress, and food poisoning. It is used as a soother for stomach/intestinal pain, ulcers, colitis and hemorrhoids. Mesquite gum is also used as a treatment for lice, cough, sore throat, mouth sores, laryngitis, fever reduction, painful teeth & gums.
Amazing, right?
When I use mesquite in baking, I combine it with other flours where the ratio is generally 1 part of mesquite flour for 2 to 3 of cup grain or rice flour. i love mesquite because it is naturally sweet and I can reduce sweeteners in recipes. I love to use mesquite in pancakes, muffins, cakes, corn bread or cookies.
As a spice, mesquite meal is great for flavoring tempeh, fish or meats. I love to sprinkle mesquite on vegetables before grilling or dehydrating. I also add it sometimes to breading for fish. I add it to vegetable stir-fries, scrambled eggs, biscuits, breads, soups, even ice cream!
Here is a secret for those of you who get hungry at 10am and lunch is not until noon. Adding 1 tablespoon of mesquite powder to smoothies in the morning keeps you full for 4-6 hours.
Mesquite meal is low in both carbohydrates and fat, low-glycemic, high in dietary fiber, and naturally sweet. The amount of nutrition supplied by mesquite meal is astounding – it is rich in calcium, magnesium, potassium, iron, zinc, protein & lysine.
According to medical studies, mesquite “is extremely effective in controlling blood sugar levels” in diabetics. The natural sweetness in the pods comes from fructose, which the body can process without insulin. In addition, soluble fibers, such as galactomannin gum, in the seeds and pods slow absorption of nutrients, which results in a flattened blood sugar curve. The gel-forming fiber allows foods to be slowly digested and absorbed over a 4-to-6 hour period, rather than a 1-or-2 hour period (which produces a rapid rise in blood sugar).
The white inner bark is used as an intestinal antispasmodic. The mesquite gum or resin is the most used element of the mesquite. It is used as an eyewash to treat infection and irritation. It has several dermatological uses, including treatment for sores, wounds, burns, chapped & raw skin, and sunburn.
Buckwheat Cereal
1 1/2 cups raw buckwheat groats, soaked overnight or 8 hours
1T mesquite powder
1t cinnamon
1/8 cup maple syrup, coconut nectar or agave nectar
pinch of Hawaiian sea salt
Rinse the soaked buckwheat groats well. Mix with mesquite, cinnamon, salt and syrup. Dehydrate until completely dry.
For an even more health giving recipe, soak buckwheat and sprout for two days, rinsing twice daily, then mix with remaining ingredients.
Serve with hemp milk (or your favorite milk) or fermented coconut yogurt.